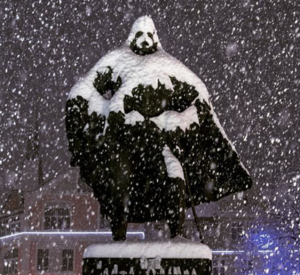 Jakub Wejher founded the town of Wejherowo in Poland in 1643 and now a statue stands in that town in his honor. He would have never imagined that he would be declared a Sith Lord in 2016. But little did he know that a statue of him in the town square, when covered in snow, would reveal his true identity: Darth Vader. Every time it snows, he would transform in the Dark Lord of the Sith. So much fun for our star war fans.

Hope your Thanksgiving was as beautiful as ours, s

Good Night! Have a great weekend! 🌄🥰

Did you look up at the sky? 🌄😍 Good Evenin

Which view will get your vote… 🌄😍 Good Ev

Good Evening, Arizona! We had our share of rains i

Just got lucky enough to capture this rainbow befo

Oh my oh my.. what a spectacular treat for us toni

Is Halloween around the corner… The moon was so