Canada is  the world’s second-largest country by total area next to Russia. Their population is highly urbanized and concentrated in major and medium sized cities. Its capital is Ottawa, and its three largest metropolitan areas are Toronto, Montreal and Vancouver.

Canada is in the northern part of North America. Its ten provinces and three territories extend from the Atlantic to the Pacific and northward into the Arctic Ocean, covering 9.98 million square kilometres, making it the world’s second-largest country by total area.

Our trip to Canada was limited to a few  cities in two provinces. Vancouver and Victoria Island in British Columbia Province in the west and Toronto, Niagara Falls, Wasaga Beach, and Niagara-on-the-lake in Ontario Province in the east. 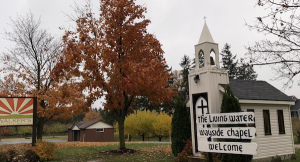 The visit to the iconic Niagara Falls on the Canadian side was a memorable trip. The view of the falls from our windows was so awesome. Despite the cold and the rains, the Niagara Trip was so great.

We visited the Living Water Wayside Chapel in Niagara-on-the-Lake, Ontario, the smallest chapel in the world. The lovely cute chapel can  hold only 6 people inside and please do make plans to stop at this unique roadside house of worship.

Hope your Thanksgiving was as beautiful as ours, s

Good Night! Have a great weekend! 🌄🥰

Did you look up at the sky? 🌄😍 Good Evenin

Which view will get your vote… 🌄😍 Good Ev

Good Evening, Arizona! We had our share of rains i

Just got lucky enough to capture this rainbow befo

Oh my oh my.. what a spectacular treat for us toni

Is Halloween around the corner… The moon was so