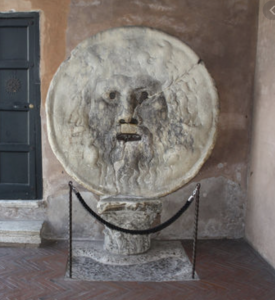 The Mouth of Truth

The Mouth of Truth (Italian: Bocca della Verità [ˈbokka della veriˈta]) is a marble mask in Rome, Italy, which stands against the left wall of the portico of the Santa Maria in Cosmedin church, at the Piazza della Bocca della Verità, the site of the ancient Forum Boarium (the ancient cattle market). It attracts visitors who audaciously stick their hand in the mouth.

The massive marble mask weighs about 1300 kg and probably depicts the face of the sea god Oceanus. The eyes, nostrils and mouth are open. Historians aren’t quite certain what the original purpose of the disc was. It was possibly used as a drain cover in the nearby Temple of Hercules Victor, which had an oculus—a round open space in the middle of the roof, similar to that of the Pantheon. Hence, it could rain inside. It is also thought that cattle merchants used it to drain the blood of cattle sacrificed to the god Hercules. In the thirteenth century the disc was probably removed from the temple and placed against the wall of the Santa Maria in Cosmedin. In the seventeenth century it eventually moved to its current location inside the portico of the church.

The Mouth of Truth is now known mostly from its appearance in the 1953 film Roman Holiday. The film also uses the Mouth of Truth as a storytelling device since both Hepburn’s and Peck’s characters are not initially truthful with each other. In Het geheim van de afgebeten vingers by Dutch writer Rindert Kromhout, the fingers of lying children are cut off by a skeleton with a scythe who lives in the Capuchin Crypt in the Santa Maria della Concezione dei Cappuccini.

The New Wave! The stranger looking down at us spoo

Most photographed view of the Horseshoe Bend from

Good Evening, Arizona! Thanks for the gorgeous sun